You are here: Home1 / Passions2 / Search and Rescue (SAR)

K2 remained the only 8,000er unclimbed in winter when my K2 2017 climbing partner, John Snorri Sigurjónsson, decided to partner with Ali Sadpara and give it a second try.  This fateful decision would end both of their lives and lead me and others to create the greatest search and rescue team in recorded history. This SAR was staged virtually, ran 24 x 7, deployed satellite technology, and navigated several diplomatic channels across three countries. This was one of the hardest things I have ever taken part, so it is best recounted by another. A word of caution – be careful who you climb with because you want the best to have your back. 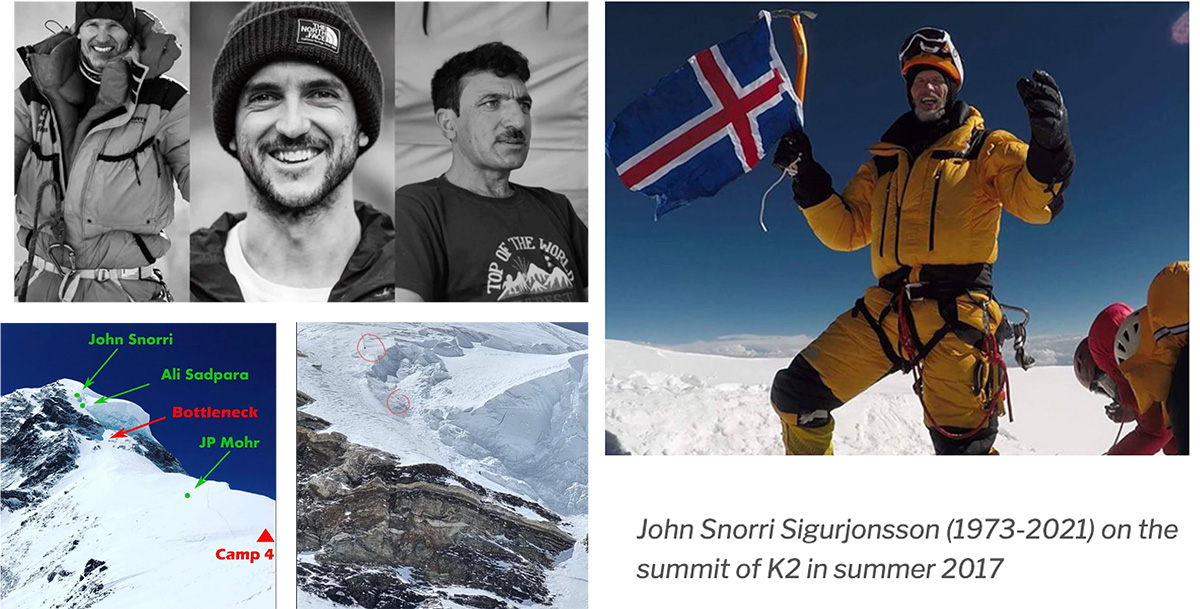 My journey with Muhammad Ali known as Ali Sadpara and John Snorri Sigurjónsson started on 12 November 2020 when Vanessa Obrien connected me with both. She wanted me to hand over the UK Scientific and Explorers Society’s (SES) flag to Ali to carry to the summit.

The same flag had been to Challenger Deep with Vanessa. I, on behalf of Pakistan Analytica Pvt. Ltd. formally presented Ali with two Pakistan flags; one to be presented back to the President of Pakistan after summit and one for my own study wall. This being the only team led by John Snorri. Vanessa and myself arranged and managed to get Elia Saikaly, an award winning Canadian film maker to join the team. Elia’s journey is a story in itself which started for me on 23 Dec 2020. Since John and Ali were amongst the first to be on K2 base camp, to get Elia to join them was a challenge in itself. It could have gone smooth, but Elia contacted COVID while acclimatising in Nepal, however, he continued to aspire to join the team. Having not felt any symptoms or weakness, he asked Vanessa and myself what should he do after completing his quarantine. I told him to go home but we ended up doing the opposite. He arrived in Pakistan on 15 Jan 2021 and on 17 Jan was in Skardu and 18 Jan 2021 on the base camp of K2. All set and complete our heroes went on their attempt to summit. It was their second attempt after they had to abandon their attempt from Camp 4 due to extreme strong winds. It was around 0200 hours on the morning of 6 Feb 2021, I was awakened by Vanessa that our team has not returned to camp 3. Due to time difference, we were keeping watch on our team’s progress. The next 10 days have been unprecedented. Although I have been involved in crisis scenarios before none lasted so long and so diverse.

By mid-day of 6th Feb, a virtual base camp had been established comprising families and experts from Iceland, Chile, USA, Romania and of course Pakistan. This virtual base camp led by Vanessa O’Brien and spearheaded by me went into a full swing ahead to utilise all available resources on ground, air and space. Pakistan Army rose to its professional best by flying helicopters for SAR at heights where no machines can operate, Thanks to Icelandic government and friends of John, cutting edge satellite imageries started to be shared. Pakistan and Chilean experts went into war rooms to analyse the satellite imageries, when weather did not permit C130 with FLIR to fly, Pakistan Air Force deployed its F16s to K2 SAR.

The SAR was so unprecedented that the Chief of General Staff of Pakistan Army Lt Gen Saher Shamshad was himself monitoring the SAR. He twice talked and briefed the Icelandic Chief of Defence and also had a detailed chat with Vanessa O’Brien. Pakistan’s Foreign Ministry was not far behind. The FM of Pakistan had called both the FM of Iceland and Chile, while his staff was constantly updating their counterparts. The SAR continues and will

Continue with no or little hope of any survivors but to honour the three great mountaineers.

It was amazing to see how these three simple souls brought three nations together. How the people and governments of Pakistan, Iceland and Chile rose to find and recover their iconic mountaineers. How each country felt the same love and remorse for the others missing. For me Being the focal person for the families and the governments connecting them to Pakistan it was and is an experience which will forever live with me. I made friends with those who were helping and part of this SAR, I felt the same pain with the families, and I learnt how these events leave those associated traumatised. I also felt how people rise to the challenge and help each other. None of us for sure slept in the first 72 hours and hardly have in these last 10 days

While those in Iceland and Chile haven’t stopped praising Pakistan and its SAR efforts led by the Army as they do in every calamity in the county voluntarily. The international community could not resist but praise Pakistan, as we rose as a nation to support anyone irrespective of nationality.

I would like to especially thank in Iceland their Foreign Office, Coast Guard, Police their space agency and Mr Gesturp, while in Chile I extend my gratitude to the Chilean Military.

I cannot forget to praise the family and friends of Ali Sadpara, John Snorri and JP Mohr who showed immense resilience, faith, courage, and patience during this time of crisis. In Pakistan I must thank Rao Ahmad an incredible soul and friend to Ali’s family, without you it would not have been possible. Mr Asghar at Jasmine Tour who was unflinching in his resolve, the Chief of General Staff of Pakistan Army, military operations and inter services public relations directorates, the foreign office and especially our mission in Oslo and last but not the least the local military commanders and government officials in the area and the valiant pilots who undertook the SAR.

My special thanks to Elia Saikaly and last but most importantly to Vanessa O’Brien. An honour to be a part of all this.

Like someone said to me during this SAR that maybe John also followed my Motto of school ‘Quo Non Ascendum’ meaning to what heights can I not rise, literally.

Maybe he did and so did Ali and JP, undoubtedly, they have risen to the height and made the Throne of the mountains K2 as their last abode.

In 2022, Dr. Roger Härtl carried a plaque for Denali Schmidt to The Gilkey Memorial. Denali Schmidt’s name was represented with his father, Marty Schmidt, however, as a young man, leaving a legacy of the Denali Foundation, it is only fitting that Denali had his own plaque. Having counted plaques (story below), I can tell you Team plaques might save space, time and seem like a nice tribute, but they are not easy to count. This video describes the importance bestowed upon one when asked to undertake this important journey.

In 2016, with the help of Di Gilbert and two Pakistan Liaison Officers, I identified missing plaques at The Gilkey Memorial.  I have re-printed this story for those who have an interest below: 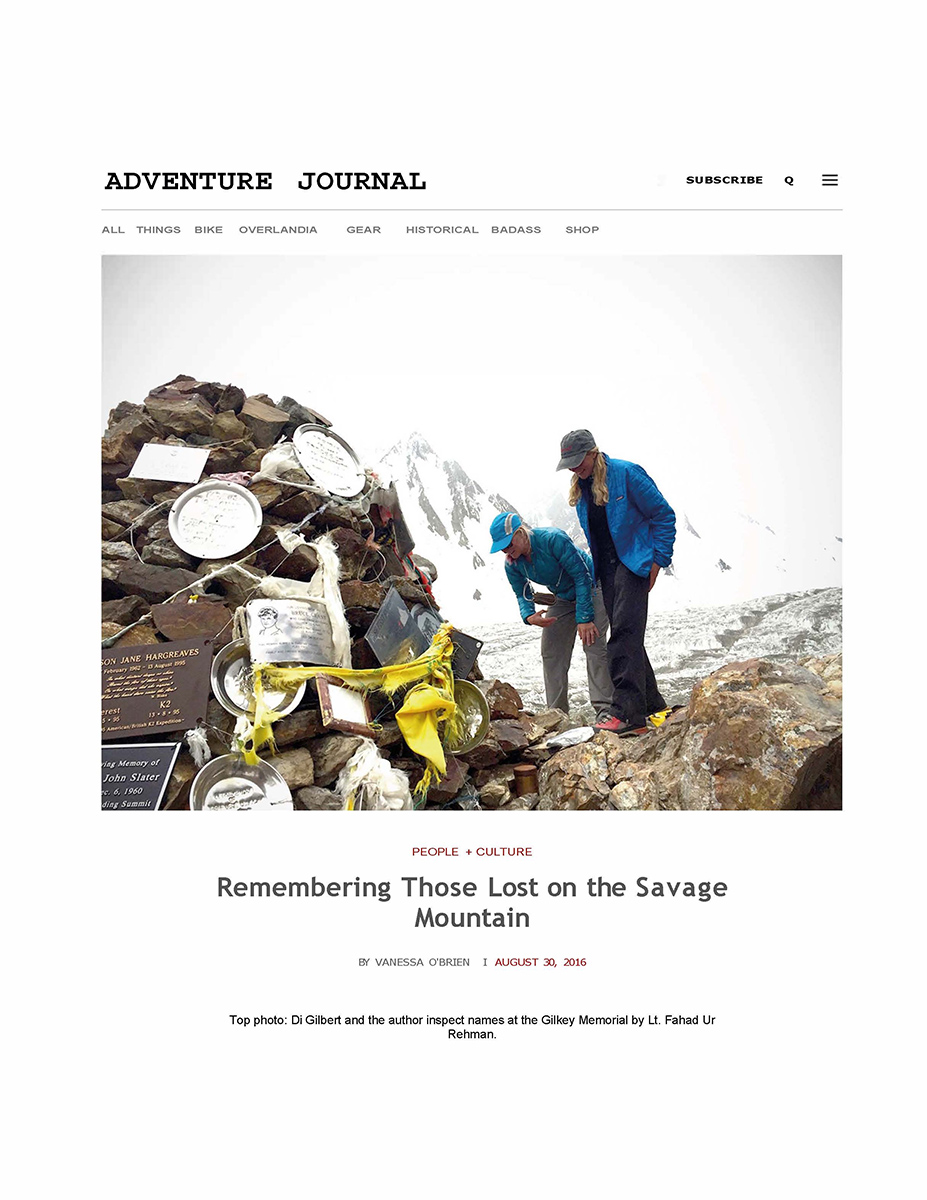 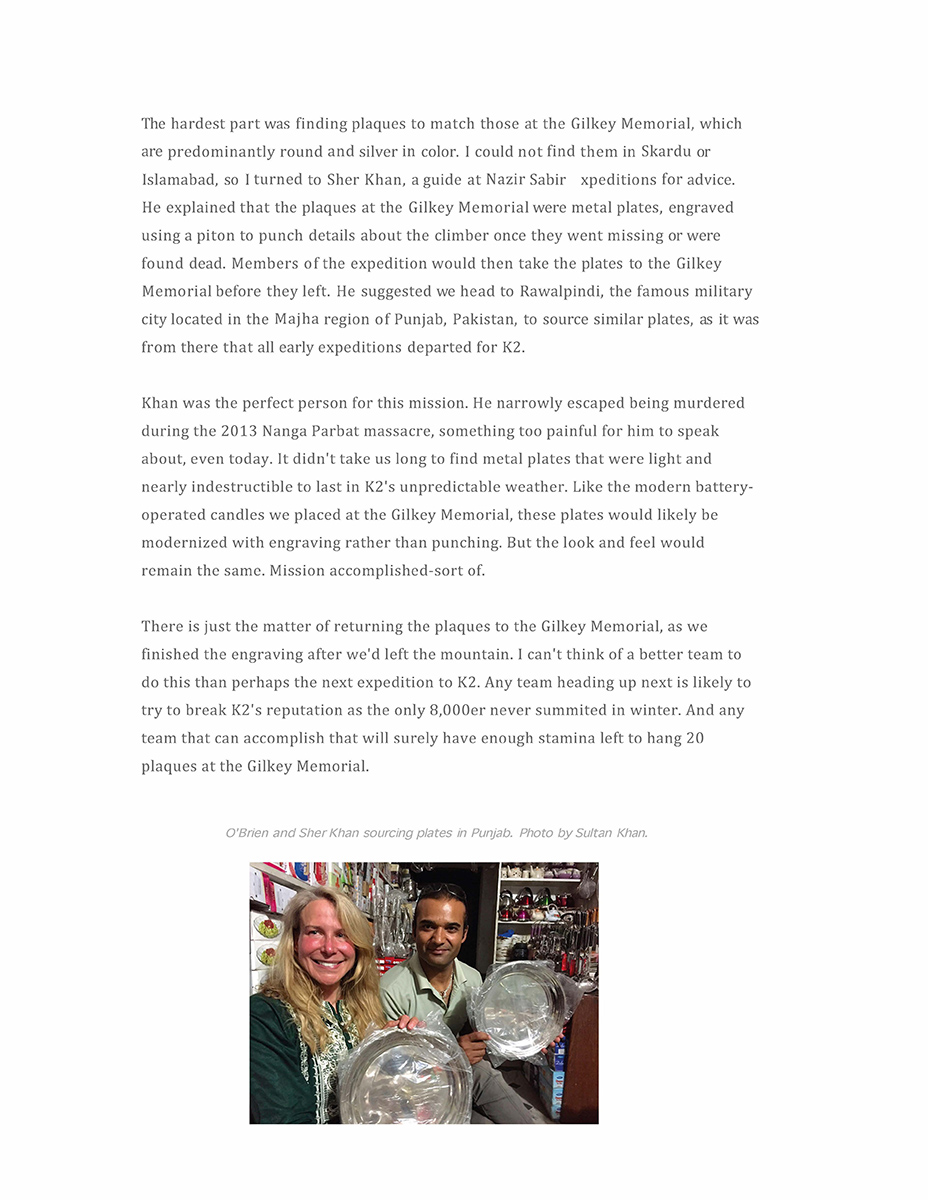