By Cmglee (Own work) [CC BY-SA 3.0 (http://creativecommons.org/licenses/by-sa/3.0) or GFDL (http://www.gnu.org/copyleft/fdl.html)], via Wikimedia Commons

There are fourteen 8,000 meter peaks (> 26,000 feet) in the World. All of them are in the Himalayas and the Karakoram which borders Nepal, Tibet and Pakistan. These are in fact The Highest Mountains in the World (source: Wikipedia).

K2 (also known as Mount Godwin-Austen or Chogori) is the second highest mountain in the world at 8,611 metres (28,251 feet) above sea level. It is located on the China-Pakistan border in the Gilgit-Baltistan region of northern Pakistan and Xinjiang, China.  K2 is known as the Savage Mountain due to the extreme difficulty of ascent. It has the second-highest fatality rate among the eight-thousanders, with one person who dies on the mountain for every four who summit.

The British led the way with Martin Conway in 1892 and by Oscar Eckenstein and Aleister Crowley in 1902.  The 1902 expedition reached 6,525 meters after five serious and costly attempts.  They spent 68 days climbing, taking three tons of equipment carried by 150 porters.  Unfortunately it was reported that they only saw 8 days of clear weather – never more than two in a row.

The Italians arrived second and would summit first, but not yet.  In 1909, The Duke of Abruzzi would reconnoitre K2, taking 3 times as much food and equipment as the British in 1902.  Unable to set a new height record on K2, The Duke of Abruzzi moved to nearby Chogolisa peak where he sets a new altitude record of 7,300 meters.

A 29-year gap prevails until 1938 & 1939 when the Americans arrive.  Charles Houston and Robert Bates try first, but hit bad weather and diminishing supplies and return home, but not until they achieve 8,000 meters.  In 1939, Fritz Wiessner arrives and is able to climb within 200 meters of the summit, forced to descend as darkness falls upon him and his Sherpa.  His expedition ends with sorrow and K2’s first fatalities – Dudley Wolfe and three Sherpa – Pasang Kikula, Pasang Kitar and Pintso.

14 years later the Americans return.  Charles Houston leads a new team in 1953.  This time an unexpected storm traps the team at 7,800 meters for 10 days during which time Art Gilkey becomes ill with thrombosis.  Planning his rescue, the team tie Art to his sleeping bag and attempt to lower him.  This is when two accidents occur.  The first is when a climber slips resulting in Pete Schoening’s famous ice axe belay (in which Pete’s ice axe holds five climbers and saves their lives), and the other is when an avalanche sweeps Art’s body down the mountain.

The Italian ascent in 1954 would lead to the first K2 summit as they take 5 miles of rope and 10 members.  The leader, Ardito Desio chose Archille Compagnoni and Lino Lacadelli to make the summit bid, however both were assisted Amir Mehdi and Walter Bonatti, who supplied them with oxygen at high altitude.

Wonder Woman must rescue Lois Lane on an expedition to the treacherous mountain K2! Lois is hot on the trail of a missing group of female climbers who are hoping to conquer the peak. But what dangers lurk in K2’s snow-covered caverns and will she survive? 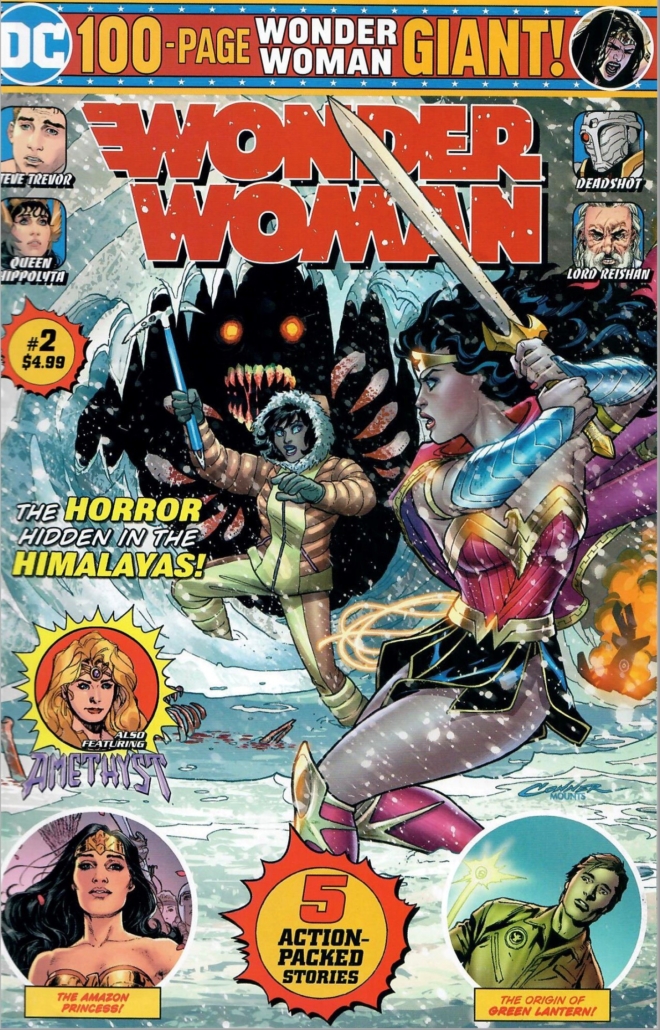 Manaslu (also known as Kutang) is the eighth highest mountain in the world at 8,163 metres (26,781 feet) above sea level. It is located in the Mansiri Himal, part of the Nepalese Himalayas, in the west-central part of Nepal. Its name, which means “mountain of the spirit”, comes from the Sanskrit word manasa, meaning “intellect” or “soul”.

In 1952, a Japanese reconnaissance party visited the area after the monsoon season. In the following year (1953), a team of 15 climbers led by Y. Mita, after setting up base camp at Samagaon, attempted to climb via the east side but failed to reach the summit. In this first attempt by a Japanese team to summit via the northeast face, three climbers reached a height of 7,750 metres (25,430 feet), before turning back.

In 1954, a Japanese team approaching from the Buri Gandaki route to the peak faced a hostile group of villagers at Samagaon camp. The villagers thought that the previous expeditions had displeased the gods, causing the avalanches that destroyed the Pung-gyen Monastery and the death of 18 people. As a result of this hostility, the team made a hasty retreat to Ganesh Himal.  To appease local sentiments, a large donation was made to rebuild the monastery. However, this philanthropic act did not ease the atmosphere of distrust and hostility towards Japanese expeditions.

Manaslu was first climbed on May 9, 1956 by Toshio Imanishi and Gyalzen Norbu, members of a Japanese expedition. It is said that, “just as the British consider Everest their mountain, Manaslu has always been a Japanese mountain.”  Even the expedition in 1956, which successfully climbed the mountain, faced (hostility from the villagers) and as a result the next Japanese expedition only took place in 1971.

Mount Everest, also known in Nepal as Sagarmāthā and in Tibet as Chomolungma, is Earth’s highest mountain. It is located in the Mahalangur mountain range in Nepal and Tibet.  Its peak is 8,850 metres (29,035 ft) above sea level.

There were a series of early attempts, however, amongst the most famous was that of 8 June 1924, when George Mallory and Andrew Irvine made an attempt on the summit via the North Col/North Ridge/Northeast Ridge route from which they never returned. On 1 May 1999, the Mallory and Irvine Research Expedition found Mallory’s body on the North Face in a snow basin below and to the west of the traditional site of Camp VI. Controversy has raged in the mountaineering community whether one or both of them reached the summit 29 years before the confirmed ascent (and of course, safe descent) of Everest by Sir Edmund Hillary and Tenzing Norgay in 1953.

In 1953, a ninth British expedition, led by John Hunt, returned to Nepal. Hunt selected two climbing pairs to attempt to reach the summit. The first pair (Tom Bourdillon and Charles Evans) came within 100 m (330 feet) of the summit on 26 May 1953, but turned back after running into oxygen problems. Two days later, the expedition made its second and final assault on the summit with its second climbing pair, the New Zealander Edmund Hillary and Tenzing Norgay, a Nepali Sherpa climber from Darjeeling, India.

They reached the summit at 11:30 am local time on 29 May 1953 via the South Col Route.  News of the expedition’s success reached London on the morning of Queen Elizabeth II’s coronation, 2 June. Returning to Kathmandu a few days later, Hunt (a Briton) and Hillary (a New Zealander) discovered that they had been promptly knighted in the Order of the British for the ascent. Tenzing, a Nepali Sherpa who was a citizen of India, was granted the George Medal.

Everest Death Statistics
For the most comprehensive year by year analysis of deaths on Everest, please visit this site.

Just a few kilometres west of Cho Oyu is Nangpa La (5,716m/18,753 ft), a glaciated pass that serves as the main trading route between the Tibetans and the Khumbu’s Sherpas. This pass separates the Khumbu and Rolwaling Himalayas. Due to its proximity to this pass and the generally moderate slopes of the standard northwest ridge route, Cho Oyu is considered the easiest 8,000 metre peak to climb. It is a popular objective for professionally guided parties.

Climbing History
Cho Oyu was first attempted in 1952 by an expedition organised and financed by the Joint Himalayan Committee of Great Britain as preparation for an attempt on Mount Everest the following year. The expedition was led by Eric Shipton and included Edmund Hillary & Tom Bourdillon. A foray by Hillary and George Lowe was stopped due to technical difficulties and avalanche danger at an ice cliff above 6,650 m (21,820 ft) and a report of Chinese troops a short distance across the border influenced Shipton to retreat from the mountain rather than continue to attempt to summit.

The mountain was first climbed on October 19, 1954, via the north-west ridge by Herbert Tichy, Joseph Jöchler and Sherpa Pasang Dawa Lama of an Austrian expedition.[4] Cho Oyu was the fifth 8000 metre peak to be climbed, after Annapurna in June 1950, Mount Everest in May 1953, Nanga Parbat in July 1953 and K2 in July 1954.

Shishapangma also called Gosainthān, is the fourteenth-highest mountain in the world and, at 8,013 m (26,289 ft), the lowest of the eight-thousanders. It was the last 8,000 metre peak to be climbed, due to its location entirely within Tibet and the restrictions on visits by foreigners to the region imposed by national Chinese and regional Tibetan authorities.

There are several different theories about the meaning of the mountain’s name. Geologist Toni Hagen explained the name as meaning a “grassy plain” or “meadow” (pangma) above a “comb” or a “range” (shisha or chisa) in the local Tibetan dialect, thereby signifying the “crest above the grassy plains”.On the other hand, Tibetologist Guntram Hazod records a local story that explains the mountain’s name in terms of its literal meaning in the Standard Tibetan language: shisha, which means “meat of an animal that died of natural causes”; and sbangma which means “malt dregs left over from brewing beer”. According to the story, one year a heavy snowfall killed most of the animals at pasture, and all that the people living near the mountain had to eat was the meat of the dead animals and the malt dregs left over from brewing beer, and so the mountain was named Shisha Pangma (shisha sbangma), signifiying “meat of dead animals and malty dregs”. The Sanskrit name of the mountain, Gosainthan, means “place of the saint” or “Abode of God”.

Shishapangma is located in south-central Tibet, five kilometres from the border with Nepal. It is the only eight-thousander entirely within Chinese territory. It is also the highest peak in the Jugal Himal which is contiguous with and often considered part of Langtang Himal. The Jugal/Langtang Himal straddles the Tibet/Nepal border. Since Shishapangma is on the dry north side of the Himalayan crest and further from the lower terrain of Nepal, it has less dramatic vertical relief than most major Himalayan peaks.

Up to 2009, 24 people have died climbing Shishapangma, including Alex Lowe and Dave Bridges (both USA) in 1999, and veteran Portuguese climber Bruno Carvalho. Nevertheless, Shishapangma is one of the easier eight-thousanders to climb. The standard route ascends via the northwest face and northeast ridge and face (“Northern Route”), and boasts relatively easy access, with vehicle travel possible to base camp at 5,000 m (16,400 ft). Routes on the steeper southwest face are more technically demanding and involve 2,200 metres (7,218 feet) of ascent on a 50-degree slope.

Here is a list of individuals who have climbed Shishapangma & Cho Oyu back-to-back. Mike Hamill and I were able to summit Shishapanmga on October 4th 2011 and then, once acclimatized, head over to summit Cho Oyu on October 12th 2011 in preparation for my Everest ascent in 2012.