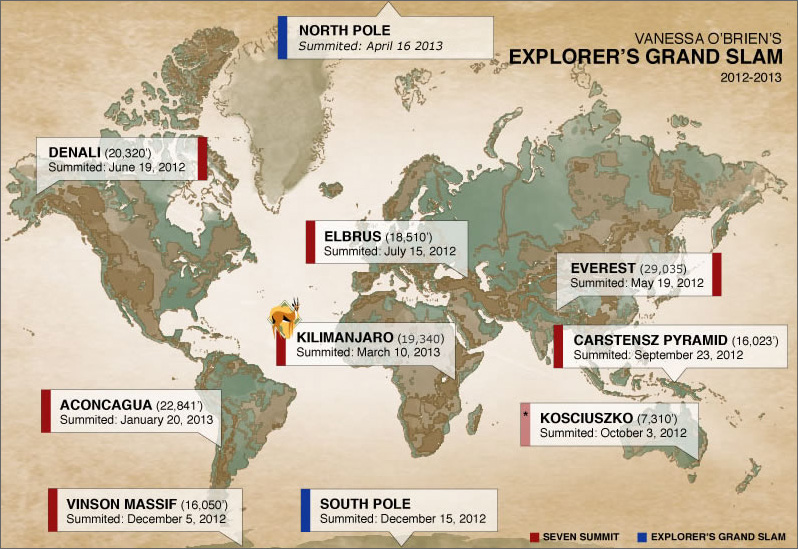 “The Seven Summits are the highest mountain peaks of each of the seven continents. From the rarefied air of the Himalayas to the plains of Africa and polar glaciers of Antarctica, the Seven Summits form a collection of selected peaks stretching to the far reaches of the globe. So far, only 350 people in the world have summited the seven peaks. The Bass list, named after the American climber Dick Bass who completed the summits in April 1985, forms the most accurate list of the summits. The Bass Seven Summits are Asia’s Everest (8,848 m), South America’s Aconcagua (6,961 m), North America’s Denali (6,194 m), Africa’s Kilimanjaro (5,895 m), Europe’s Elbrus (5,642 m), Antarctica’s Vinson (4,892 m), and Australia’s Kosciuszko (2,228 m.)”

Video compilation of The Explorers Grand Slam. Over 7 minutes join me on a journey through Asia, Africa, Australia, Antarctica, South America, Russia, Alaska, Indonesia and the North & South Poles.

“Located in the northern part of the Indian subcontinent in Asia, the Himalayas is a long mountain range that forms a formidable barrier between the Tibetan Plateau and the alluvial plains of the Indian subcontinent. Mount Everest, the world’s highest peak, is located in the Mahalangur Himal subrange of the Himalayas. It lies on the boundary between the Tibet Autonomous Region of China and Nepal. Rising to an elevation of 8,848.86m, Mount Everest is the most prominent peak among the Seven Summits of the World.”

“Located in the northeastern part of the East African nation of Tanzania, close to its northern boundary with Kenya is Mount Kilimanjaro. The mountain forms a part of Tanzania’s Kilimanjaro National Park and is situated approximately 300km south of the Equator, 160km east of the East African Rift System, 225km south of Nairobi – the Kenyan Capital city, and 280km from the Indian Ocean. Rising to an elevation of 5,895m above sea level, Mount Kilimanjaro is an inactive stratovolcano, that is considered the tallest mountain in the African continent as well as the highest free-standing mountain in the world. It is also the 4th most isolated mountain peak on Earth and the 4th most prominent peak among the Seven Summits of the World after Mount Everest, Mount Aconcagua, and Mount Denali.”

“Located in the south-central part of the US State of Alaska, close to the center of the massive Alaska Range is Mount Denali or Mount McKinley. Rising to an elevation of 6,190m above sea level, Mount Denali is the highest mountain in the State of Alaska as well as in the entire continent of North America. It is also the 3rd most isolated mountain peak on Earth and the 3rd most prominent peak among the Seven Summits of the World after Mount Everest and Mount Aconcagua. Mount Denali forms the central feature of the Denali National Park and Preserve and is located about 210 km to the north-northwest of Anchorage – Alaska’s most populous city and about 275 km southwest of Fairbanks – one of the largest cities in interior Alaska.”

“Mount Aconcagua is the highest mountain in South America and the tallest in the Western and Southern Hemispheres. It is one of the mountains in the Principle Cordillera, a mountain range in the Andes making up the boundary between Argentina and Central Chile. Aconcagua is located in Argentina (near the border with Chile) and dominates the skies of western Mendoza Province. It is located approximately 112 km of the city of  Mendoza; about 15 kilometers from the boundary between Argentina and Chile; and about 5km from the San Juan Province. However, the mountain’s western flank builds up from Chile, on the coastal lowlands near Santiago de Chile. Mount Aconcagua is considered as one of the world’s “Seven Summits” (each of the seven tallest mountains in each continent).”

“The Puncak Jaya Mountain attains an elevation of 16,024 feet in the Oceanic nation of Indonesia. It is situated in the Sudirman Range of the Papua Province in Indonesia. It is also the highest peak in that province of the country. Among climbing enthusiasts, the mountain is also known as Carztensz Pyramid. In 1623, Dutch explorer and mountaineer Jan Carstenszoon was the first foreigner to have discovered the mountain. Although he had not climbed it, he was also the first to verify that there were extensive glacial ice covers on top of the mountain. The name “Carztensz Pyramid” was given to the mountain in honor of Jan Carstenszoon.”

* In 80’s Dick Bass set the task of climbing the highest peak on each continent. As a businessman without climbing experience, Mr. Bass defined each continent according to the lay person’s concept – hence Australia’s highpoint, Mount Kosciuszko, was included in the Seven Summits.Renowned mountaineer Reinhold Messner revised Dick’s list by substituting the more difficult Carstensz Pyramid (Puncak Jaya) of New Guinea at 16,023 feet for Mount Kosciuszko. I have climbed both.