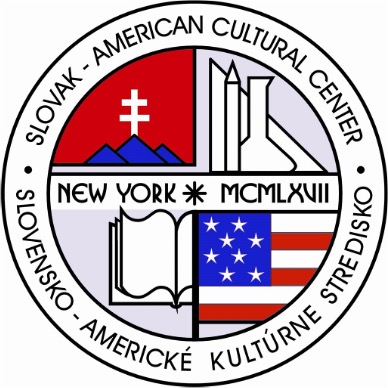 It was an honour to be part of the S-ACC’s 28th Annual Gala on February 26, 2022, at The Royal Manor, New Jersey. The annual gala is the most important fundraiser of the year, and despite the celebrations, which included dinner, dancing, live music, and a special guest performance by Andrej Kandráč, it was also a tense atmosphere with Russia declaring war on Ukraine, a neighbour of Slovakia.

The Slovak American Cultural Center (S-ACC) was founded in 1967 in New York City as a not-for-profit organization to pursue the following goals:

​The founders of S-ACC were Slovak immigrants who came to the US to escape political persecution after the Second World War. Many of them settled in the New York metropolitan area and immediately set out on a rich program of lectures, seminars, concerts, and other cultural events. These activities gave Slovaks in the tri-state area of New York, New Jersey, and Connecticut the opportunity to socialize and to study, enjoy, and preserve, as well as further develop, their rich cultural heritage.

​Since 1993, S-ACC has organized annual Slovak Balls, and used them as an opportunity to recognize and honor people of Slovak origin for their significant achievements. To learn more about S-ACC, click here.

Below are some photographs and videos from the evening: